Here you’ll find the most commonly asked questions and their answers. If you don’t find what you are looking for here, you can look through the:

How can I run a test across multiple PLC cycles?

This can be accomplished by keeping the function block under test as an instance variable of the test suite rather than the test method. You can download an example here. In this example, the FB_ToBeTested is instantiated under the test suite (FB_ToBeTested_Test), and can thus be controlled over multiple cycles. Then all that’s necessary to do is to set the condition for when the assertion should be made in the test itself, which in the example is when the TestSuiteTimer has elapsed (TestSuiteTimer.Q).

How can I disable/ignore a test?

Add DISABLED_ in front of the test name, for example:

In a number of scenarios, TwinCAT won’t let you write directly to certain variables:

Writing to these variables wouldn’t make sense and should be prevented in the normal PLC code, so having special privileges during testing is a must.
To support these cases, TcUnit provides helper functions like WRITE_PROTECTED_BOOL(), WRITE_PROTECTED_INT() (and so forth) for setting these type of variables. For an example of how to use these, let’s assume you have a test:

Where the FB_Beckhoff_EL1008 holds a variable:

Whereas afterwards you can make an assertion as usual:

Is there a way to hide TcUnit in my libraries?

You can accomplish this by the Hide reference option for referenced libraries. This option lets you hide TcUnit from your other projects.
Let’s assume you’ve developed a library MyLibrary, which has tests written in TcUnit. You make a PLC project MyProject, which references MyLibrary.

If you use Hide reference on TcUnit in MyLibrary, then TcUnit won’t show up in the imports list of MyProject. You can find it in the Properties tab: 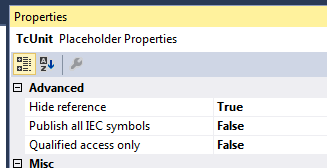 How do I do assertions on the BIT datatype?

I want to do an assertion on two variables both declared with the BIT-datatype, but I have noticed that a AssertEquals_BIT() does not exist. What do I do?

The reason a AssertEquals_BIT() does not exist is that TwinCAT does not allow a BIT-datatype as a variable input. If you have data declared with the BIT-type, the easiest way to do an assertion on these is to do a BIT_TO_BOOL() conversion and use the AssertEquals_BOOL().

When I run more than 100 tests in a single test-suite I get the wrong results, why?

When TcUnit is running it allocates memory in the PLC to store the test results. The maximum number of tests for every test suite has been set to 100, which however is a configuration parameter for TcUnit and can be changed. Parameters for TcUnit (and in fact any library references) are stored in your project, which means that this change will be persistent for your project/library. To change this max amount, to say for instance 200 tests per test suite, go to the library references and select TcUnit, then go to GVLs → GVL_Param_TcUnit → MaxNumberOfTestsForEachTestSuite.

Is it possible to run test suites and/or tests in a sequence?

As usual, the TEST_FINISHED() will indicate that this test is finished, and the framework will go to the next test. Note that you don’t need to create any state machine for calling the different TEST_ORDERED() tests. You can (and must!) call all TEST_ORDERED() at the same time. The framework will make sure to only care about the assertions of the test that is currently running.

This means the following combinations can be used:

For maximum flexibility, these combinations are allowed as well for special occasions:

Note that you can’t execute test-suites with both TcUnit.RUN() and TcUnit.RUN_IN_SEQUENCE() at the same time (which wouldn’t make any sense).

For a couple of TwinCAT projects that shows how to run both test suites in a sequence and individual tests in order, click here.

Why is it taking so long to get the results from TcUnit?

If you have many test suites and/or tests, it can take some time for TcUnit to print all those results. Since version 1.1 of TcUnit, much more data is printed to the ADS-logger as this data is used for the communication with TcUnit-Runner. If you know that you will only run your tests locally and without integration to a CI/CD tool using TcUnit-Runner, you can set the parameter LogExtendedResults to FALSE (it is default TRUE). To change this parameter, go to the library references and select TcUnit, then go to GVLs → GVL_Param_TcUnit → LogExtendedResults.

Is it possible to have a time delay between the execution of the test suites?

If I call ADSLOGSTR(), my messages don’t show up in the correct sequence. Why?

If I call Tc2_System.ADSLOGSTR() during execution of a test, my messages don’t arrive in the expected order. Let’s for example assume this very simple (always failing) test:

This will result in this order of messages:

I want the messages to arrive in the correct order, how is this achieved?

The reason for this behavior is because all ADS messages that TcUnit creates/outputs are buffered (for deeper technical description read this). If Tc2_System.ADSLOGSTR() is used directly, the messages can come out of sequence in relation to the message created by TcUnit as TcUnit buffers the messages to not overflow the ADS message router.

The solution is to use TCUNIT_ADSLOGSTR(), which accepts the exact same inputs as ADSLOGSTR(). By using this function, the ADSLOGSTR() messages are put in the same buffer as TcUnit is using for its output.

So if we replaced the call to Tc2_System.ADSLOGSTR() to TCUNIT_ADSLOGSTR() instead, we get this:

How do I test functions?

It’s done almost identical as in the introduction user guide, but simply replace the instance of the function block that you want to test with the call to the function instead.
Assume we have a function:

I have problems running TcUnit on a ARMv7 controller, why?

When running TcUnit with a controller using ARMv7 you can run into issues, such as breakpoints not working. This seems to be an issue with the limited memory of the controllers using an ARMv7 such as the CX8190 and CX9020. Please adjust the parameters related to memory allocation.

For more information on a set of working parameters, see this issue on GitHub.

Does TcUnit-Runner only work with Jenkins?

No, Jenkins is just used as one example of an automation server. Any automation server of your choice should work fine, as long as it can execute the LaunchTcUnit.bat windows batch script or the TcUnit-Runner.exe windows executable, and it can handle standard  xUnit/JUnit XML format it should work just fine. Here is an example configuration for a GitHub action and one for Azure pipelines

When launching a build of the The Jenkins project, the TcUnit/xUnit results are never returned. Why?

Check the console output in Jenkins if it provides any information. Also, try to build the project manually (by opening Visual Studio) on the build server and check if builds correctly.

Can I use a virtual machine as Jenkins agent for running TcUnit tests?

Yes, this is possible with the limitation that it is not possible to run TwinCAT on a Windows/shared core but instead it is required that TwinCAT (and more specifically the unit-tests) are to be run on an isolated core in the virtual machine. Go here to read more on the subject.